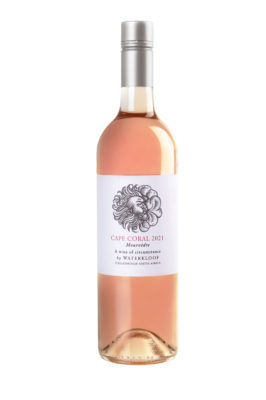 IT’S REALLY ALL ABOUT THE VINEYARDS

Mourvèdre is one of the most underrated red grape wine varietals and it goes by 95 other names, including Mataró, which is used in Portugal.

It is a well-known rosé varietal used in regions such as Provence and the Rhône Valley in France. Our Circumstance Cape Coral Mourvèdre is produced from grapes on the slopes of the Schapenberg as well as the rest of the Stellenbosch wine growing region, characterized by relatively mild winters and long, warm summers. The vines are cultivated under dryland conditions and planted in a combination of sandstone and deep red soils which provide adequate water for this late ripening varietal.

Grapes were hand harvested and hand sorted, followed by a gentle whole bunch pressing in our new horizontal basket press, to extract only the finest juice. No further maceration of the juice with the skins was allowed, nor the addition of extraction enzymes or settling agents, which resulted in a very light salmon colour rosé. The juice was run down via gravity into tank and left to settle naturally for 12 hours.

From there, we racked the clean juice off to wooden fermenters to start the fermentation spontaneously, relying on wild yeasts that occur naturally in the vineyard.

The reason why we ferment in our older wooden fermenters is to ensure a slow ingress of oxygen throughout the process and therefore a longer fermentation without picking up any oak aromas. The wine was then left on the primary lees for an extended period to add further complexity before bottling.

The 2020 Winter started late but can be described as a cold and wet season. We received over 500 mm of rain during this time. The days heated up slightly but the evenings were freezing with a few frosty mornings. The vines were able to go into a good dormancy period.

We welcomed a warm Spring time and Summer without excessively high temperatures. The famously ferocious winds at Waterkloof played their part bringing down the yields but also lowering the disease pressure.

The remainder of the growing season was ideal, with enough sunlight and not too much rain – which could lead to mildew. We could see that the soils were still retaining the moisture- which is of course also ideal. Verasion only started much later than usually giving us the first indication of a possibly later picking season.

Our 2021 harvest slowly started around the 8th of February and reached full intensity from the 12th of February. The harvest conditions were positive with enough sun, not too much rain and few very hot days. The whites came in over a period of about 3 weeks, with the reds following immediately after. All harvest dates were determined by taste in the vineyard, waiting to achieve the ideal balance between phenolic ripeness, potential alcohol and acid. In terms of yield, there was some variation but overall, unfortunately for us the yields were down a lot on the reds and very similar on the whites compared to 2020.

A TASTING NOTE FROM THE GLASS OF NADIA LANGENEGGER

A delightfully pale coloured rosé. Delicate, fresh red berry aromas, hints of rose petals, combined with a flinty note are prominent on the nose. The palate shows lovely acidity and elegance with a lingering aftertaste. Traditionally, the wine is served chilled on its own, but also marries well with the combination of spicy, tuna-based sushi and soya sauce.